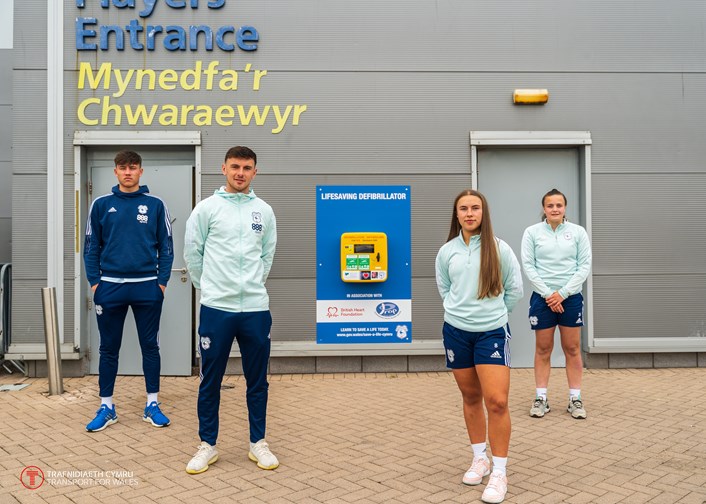 Cardiff City have backed Transport for Wales’ calls for more respect for life-saving defibrillators following a spate of vandalism.

Seven incidents of defibrillators being damaged or stolen have been reported in the last 12 months at locations across Wales, including at Ninian Park station opposite Cardiff City Stadium.

Cardiff City and Wales internationals Rubin Colwill, Mark Harris, Hollie Smith and Seren Watkins have all taken part in a video highlighting the importance of having defibrillators in communities.

It will now be shared across TfW’s and Cardiff City’s social media channels to target younger football supporters and rail users.

“We’re incredibly grateful to Cardiff City for the fantastic support they have given to our defibrillator campaign.

“The defibrillators are a vital tool for the whole community and this vandalism is putting people’s lives at risk.

“A cardiac arrest can happen to people of all ages and the use of a defibrillator can greatly increase someone’s chance of survival. It’s important the defibrillators are available in key locations, such as railway stations and sports stadiums, and in good working order.

“We ask anyone who sees a defibrillator being damaged to call the British Transport Police immediately.”

Cardiff City have been involved in a number of campaigns to improve access to defibrillators and CPR training, following the sad passing of club doctor Len Nokes’ daughter Claire.

Claire suffered a cardiac arrest at a friend’s house in December 2016, subsequently confirmed as having been brought on by a condition called myocarditis. She passed away eight months later.

According to British Heart Foundation Cymru, there are around 2,800 out-of-hospital cardiac arrests in Wales each year, but just one in 20 people survive.

“Every second counts when someone has a cardiac arrest, and, alongside CPR, prompt use of a defibrillator is critical in giving them the best chance of survival. To put it simply – access to a defibrillator could be the difference between life and death, and anyone who vandalises a defibrillator is putting lives at risk.”

For the Welsh version of this story, tap here