We’ve been shortlisted for 6 Awards 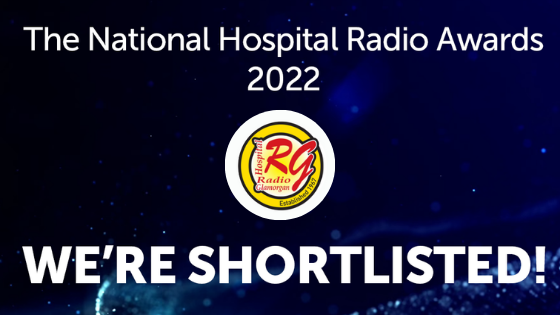 The shortlists for the 2022 National Hospital Radio Awards have been revealed by the voice of Strictly/voice of the balls Alan Dedicoat.

We are thrilled to have received 6 nominations in total including ‘Station of the Year‘, once again making us one of the top 10 hospital radio stations in the UK.

We’ve received a nod in the ‘Best Speech package‘ category, for following Luke Davies and his efforts leading up to and successfully completing the Swansea half marathon.

Hannah has been part of Radio Glamorgan team since 2016 as a contributor to the ‘Teenage Cancer Trust Takeover’. The show gave patients and young people being treated with cancer a chance to ‘takeover’ Radio Glamorgan for a few hours every Sunday afternoon. In 2018 the programme won a national award, but two years later came to a natural end following the passing of Hayley Pattimore, one of the shows other main contributors who was only 26. The finale of the show fronted by Hannah and Jamie was broadcast in December 2020 which featured clips from the show and tributes to Hayley, has been shortlisted in the ‘Best Promotion‘ and ‘Best Special Event‘ categories.

It’s not been an easy two years for us all, so the fact we’ve been nominated for six awards is just fantastic! This is the reward to all volunteers who’ve put the effort in during the pandemic to ensure patients, staff and where possible visitors have been informed and entertained, even when access to our studio was restricted.

The entire team should be really proud of what they’ve achieved, a special mention to Luke and Hannah who’ve rightfully earnt their nominations in their respective presenter categories

It’s an absolute pleasure to be a part of Radio Glamorgan and as much as the pandemic has taken away from so much of us, it’s allowed me to still present for a station I truly love.

I’ve been shortlisted in the Best Male category of this year. Something I am overjoyed about! It’s all about teamwork and it’s amazing to get recognised.

“Hospital Broadcasting organisations across the UK have continued to deliver entertaining entertainment, news and information to healthcare users throughout this pandemic. What is truly remarkable is that our member stations have adapted to these difficult times and remained committed to serving, producing and presenting dedicated local radio for the healthcare community. Our National Hospital Radio Awards recognise the talent and dedication of hospital broadcasting volunteers, and this year’s entries showcase that remarkable talent and commitment.

We’re not the only Welsh station to be shortlisted this year, a big congratulations to Bridgend Hospital Radio and Radio Ysbyty Gwynedd who’ve both received two nods each.

The venue and date of the ceremony has yet to be announced, but until we know our fingers remain crossed for all our nominations!