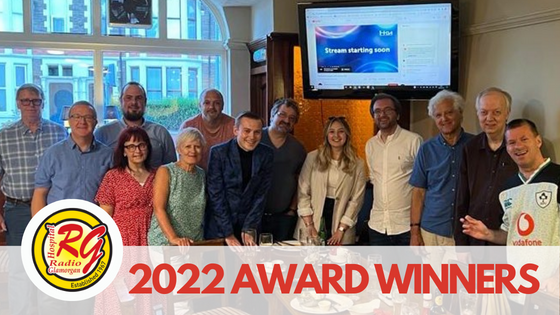 Radio Glamorgan (RG) were shortlisted in six categories, including ‘Station of the Year’.

Both awards were for the ‘Teenage Cancer Trust (TCT) Takeover‘, the show that gave patients who were going through a cancer diagnosis at the unit at the University Hospital of Wales in Cardiff, a voice.

They were given the opportunity to plan and present their own radio show, choose the topics they were going to talk about and also choose the music they wanted to play.

At the end of 2020, the show came to a natural end, following the passing of one of the presenters Hayley, who was only 26.

The entries that were recognised at the 2022 award ceremony were for the Finalé that was presented by Hannah Abraham and Jamie Pritchard. The three-hour show featured tributes and song requests from Friends, Family and Colleagues, as well as clips from previous programmes.

Commenting on the win, Hannah said,

“We won it for Hayley! She was an absolute gem and is sorely missed by us all. Radio Glamorgan gave us the platform to have fun but also share our experiences with the wider world.”

“The show raised the profile of the Teenage Cancer Trust and the amazing work it does. We balanced the fun with the tough subjects, we laughed together, cried together but supported one-another at every possible turn.”

Commenting on the entry that was awarded Gold, the Judges said,

“An excellent piece of work which comes from the heart. It’s clear about its message with great use of actuality. Emotional while celebratory too.”

Radio Glamorgan were not the only gold winners from Wales. Connor Morgans from Bridgend Hospital Radio (BHR) picked up the gold award for Best Male Presenter, whilst Radio Ysbyty Gwynedd won the prestigious gold award for ‘Station of the Year’.

You can hear all the winning entries here on the Hospital Broadcasting Association website.